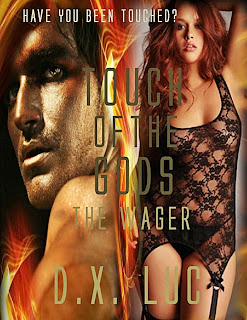 
I didn't. The ability to write has been with me for as long as I can remember. Of course, it took the wise words and belief from friends that allowed me to take the next step.
2.      Who is your favorite author? Favorite book?
Homer's The Odyssey and any work from Edgar Allen Poe.
3.      Where do you get the inspiration for your stories?
Everyone and everything works to be my inspiration. Touch of the Gods: The Wager came from my daughter's idea. Hot Shots came from a conversation with a friend.
4.      Do your characters come first or the does the plot come first?’
Characters come first for me. I see them and they tell me their story. Of course my muse Sam helps out immensely. (Yeah, I named my muse!)
5.      Have you ever fallen in lust… I mean love with one of your characters?
Every single time. I love my heroes because they're just so damn sexy.
6.      When it comes to your sultry sex scenes – where do your ideas come from?
My dark and naughty mind. I'm telling you, if anyone decided to dive into my brain, they'd end up either running out in a panic or feeling sated after a fun time. It's all twisted up in there!
7.      Have you ever been turned on by something you’ve written?
All the time. If I didn't, then I'm not writing my scene correctly.
8.      If you had the opportunity for a one night stand with one of your characters who would it be and why?
Well, I'm a naughty girl so we know exactly what I'd do. But I want to give a shout out to two characters that I'd totally enjoy. Hades from Rosanna Leo's Sweet Hell. I'd lick him until he saw the light. You know, because there's no light in the Underworld. And Tony from The Portrait by Charlie Daye. I've been known to turn bad boys into begging sex toys! (Charlie laughs here... I'm sure Tony would love to take a bite out of you too!)
9.      Tell us about your current novel.
At the moment, I'm actually editing/revamping/fleshing out a previously written novella that is turning into a novel word count wise. It's a non romance, paranormal fiction titled The Replacement. I have started the sequel to the Touch of the Gods trilogy as well.
10.  Is it a stand alone story or part of a series? If it’s a series what can we expect in the next chapter?
The Replacement will be a series most likely. Following the main character Jackson McFlaurey as he learns more about his job working for Death.
11.  What can we expect from you in the future? Any new books in the works?
More to the Down the Yellow Road saga, Touch of the Gods, and many more to come. I never stop coming up with stories to write.

Paperback: http://www.amazon.com/Touch-Gods-The-Wager-Volume/dp/147762242X/ref=cm_cr_pr_product_topKindle: http://www.amazon.com/The-Wager-TOUCH-GODS-ebook/dp/B0080S7PS4/ref=tmm_kin_title_0Blurb: When love and war make a little wager, what could possibly go wrong?I am Hephaestus. God of inventions, blacksmiths, and volcanoes. Sounds like I'm awesome right? Well, I'm not. In fact, I'm the loser of Olympus and a new bachelor to boot. Living the single life is great until a decade passed. Honestly if my divorce from the Goddess of Love wasn't bad enough, I am still being rejected by the other women of my home.Because of an incessant need to make me a pawn in his game, my brother, Ares convinces Eros to make a little bet. A wager that puts my lack of love life to the test. Sent to Earth, I'm skeptical, when suddenly I lose myself in the sensual scent and beauty of the full bodied Vanessa. She is my everything, my perfection.Sadly, from a single caress upon her silky flesh, I sent our lives into a downward spiral of hell. To save her, I must get beyond my demons of the past. And to save me, she will have to decide if I'm worth giving up everything for.
Posted by Charlie Daye at 10:13 AM