New piece from the Colonial

I headed back down stairs and through the kitchen to the side door that led out to the second building on the property. I unlocked the door and went inside.
The entire room was still outfitted as a doctor’s office. All of Dominic’s father’s things were still here. It made my heart ache. I really did not want to disassemble his father’s office and would need to call Dominic to ask him what he suggested. I didn’t even know if Dominic knew any of this stuff was still here.
I left the office and locked the door behind me. Once I got back into the house I pulled out my cell phone and called Aria.
“Hello?”
“Hey, my friend.”
“Hey Mel! Did you make it okay?”
“I did.”
“And… what do you think of the house?” she asked.
“I could not have asked for anything more perfect. It’s beautiful Aria and even that doesn’t seem like the right word to do this place justice.”
Aria laughed, “I’m glad you like it Mel.”
“I love it Ari… but I do need to talk to Dominic about his father’s office.”
“What’s wrong?” she asked.
“Ari, all of Daniel’s things are still there. It’s still setup as if he never left and I’m not sure what to do with it all. I’d feel horrible getting rid of everything.”
“Ahh… hang on a sec and let me get Dominic.”
“Thanks Ari.”
Aria set the phone down and went to fetch Dominic. He came on the line a few minutes later, “Hey Mel!”
“Hey D.”
“Aria said you wanted to talk to me about my father’s old office?”
“I do but first… thank you so much for letting me use this place. It’s gorgeous!”
He laughed, “You’re welcome.”
“So, I was doing my walk through and when I went into your dad’s office… I found that it was still completely set up as a doctor’s office. It’s almost like your dad never left. His desk, exam table, book shelves… everything is still there and I felt horrible taking it apart with out telling you first. I wasn’t sure you even knew it was still there.”
Dominic sighed, “I did know that, actually, but I didn’t have the heart to disassemble it myself. It’s been years since I’ve been there and the thought never even occurred to me to clean it out before you got there. I’m sorry Melissa.”
Posted by Charlie Daye at 8:00 AM No comments:

My Inspriation for Dominic Lauder 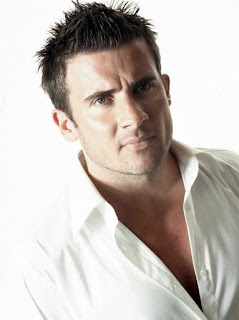 Posted by Charlie Daye at 12:20 PM No comments:

Excerpt from Book 2 in the Curse Breakers Series... The Colonial

It was another sunny day in the city of angels. The sky was blue and the smog settled over the city like a dirty old blanket. I had just pulled into the parking lot of my office building. The sign on the building read “M.M.Salazar, Attorney at Law.
Now, you’re probably wondering why the sign didn’t say Melissa M. Salazar, Attorney at Law. This is easy enough... to explain – business comes a lot swifter when your potential clients think you’re a man. Perhaps this is somewhat misleading but it’s okay. I had one of the busiest practices in Los Angeles.
My firm handled everything from divorce to domestic violence and everything in between. My clientele ranged from your average everyday people to high profile A-listers. There was never a dull moment or a lull in my work load, hence the reason I was looking for a way out.
I loved what I did. Helping people was my primary reason for becoming an attorney but when your professional life starts to override your personal life it becomes a problem.
About two years ago, my job pulled me away from helping my best friend, Aria, when she needed me most. Aria found herself stuck in the midst of a supernatural showdown and she had to face it alone. Everything turned out great for her in the end, though. She has a fantastic husband, Dominic, who adores her, and two beautiful twin boys. I know Aria doesn’t hold any ill will against me for abandoning her at her time of need but it doesn’t mean that I don’t have my own nagging guilt to deal with. Sometimes you are your own worst enemy.See More
Posted by Charlie Daye at 12:19 PM No comments:

http://www.amazon.com/House-Curse-Breakers-ebook/dp/B0078VIRPE
Posted by Charlie Daye at 12:17 PM No comments:

Link to purchase the House from bn.com

The house is on sale this week at bn.com and Amazon. com for $0.99 a copy! Get yours before the price goes back up!
Posted by Charlie Daye at 12:14 PM No comments: The first book in the Curse Breakers Series is now available for purchase at bn.com and Amazon.com
Posted by Charlie Daye at 12:11 PM No comments: