1.                   How did you make the decision to become a writer? It wasn’t a conscious process. Stories have always run around in my head while traveling in the mountains with a pack on my back. After one trip in 2008, I decided to do something different. When I came home, I sat down at the keyboard and started writing. I’ve been writing ever since. It’s addictive.


2.                   Who is your favorite author? Favorite book? That’s a hard one. I really like Karen Marie Moning, Patricia McKillip, Ursula LeGuin, Tolkien and Terry Goodkind. I don’t know that I have a favorite book. But I like most anything in the fantasy romance genre. I like sword and sorcery fantasy, too. And some urban fantasy, though I’m think vampires have been overdone since Ann Rice popularized them.

3.                   Where do you get the inspiration for your stories? In the mountains, specifically the Sierra Nevada range. I spend as much time as I can rambling along trails and taking photographs. I’ve also always been a voracious reader. I think it helps spur the imagination.

4.                   Do your characters come first or the does the plot come first?’ I’ll have an idea that involves both a character and a specific world, since I write fantasy and science fiction. I’m not sure which comes first. Characters are easier for me than world building. I find most of my editing is cleaning up the nitty gritty details of my alternative settings. Characters probably come easily for me  because of my background as a psychologist.

5.                   Have you ever fallen in lust… I mean love with one of your characters? Oh my, yes. Some of the guys are impossibly hunky. I mean who wouldn’t fall for a tall, muscular guy with long, coppery hair and intense eyes burning into your soul? Who wants you to be his, and his alone—forever.

7.                   Have you ever been turned on by something you’ve written? Of course. If it doesn’t turn me on, why would I expect a scene to do anything except lie there on a page practically screaming ho hum when a reader picks up one of my books or stories. I’ve spiced up more than one romantic scene because it didn’t do much for me on reread.

8.                   If you had the opportunity for a one night stand with one of your characters who would it be and why? It’s a toss-up between Angus MacTavish in A Time for Everything and Trevor deGroot in the Transformation Series books. Both men are gorgeous. Angus is dark with ever-so-green eyes. He’s a nineteenth century Scottish laird. Trevor is blond with blue eyes. He’s a twenty-first century guy who can do just about anything. Both have classically handsome features, but Angus is more, uh, feral looking. Maybe that’s because he’s from deep in the past. Both men are sure of themselves and know what they want. And both are willing to pull out all the stops for the women they love. Pssst! Don’t tell anyone, but it’s reassuring to think that a man can actually take care of you.

9.       Tell us about your current novel. That would be Psyche’s Promise, just released by Gypsy Shadow Publishing. The blurb on the back cover is:

The Transformation Series is about finding out who we truly are when the chips are down. About what is real and what is illusory. About what matters and what doesn’t. It’s easy to show our best side when everything is going well. How about when the world is disintegrating around us? What happens then?

In this final book of the Transformation Series, Lara and Trevor’s relationship undergoes stresses that threaten to annihilate them. Constantly hungry, besieged by dark forces, they need every resource they’ve developed as a couple to keep from ripping each other apart. With Lillian and Raven— two ancient Celtic Sidhe— off fighting their own war against Goblin hordes, Lara has only herself and her half-baked magic standing between survival and certain death for herself, her love and their child.

The remote location that was supposed to solve all Lara and Trevor’s problems has done anything but. Though she works diligently, Lara’s crash course in magic proves woefully inadequate. When Trevor is captured by demons, Lara curses her decision to leave Seattle. “If only I’d known,” she cries, convinced she can’t go back. Or can she?

10.               Is it a stand alone story or part of a series? If it’s a series what can we expect in the next chapter? It is the final book of the Transformation Series. So, all three books are available now in print and eformats.

11.               What can we expect from you in the future? Any new books in the works? I have two novels making the publishing rounds. Fortune’s Scion made it past the Angry Robot gatekeeper since they asked for a full manuscript. That one is a YA contemporary fantasy with romantic elements. The other, Earth’s Requiem, is an adult contemporary fantasy with romantic elements. It’s under serious consideration by Samhain.  I have a novella, A Time for Everything, coming out soon from Liquid Silver Books. And another novella, Gabrielle’s Cauldron, that’s about ready to submit to them for consideration. I really need to get moving on the sequel to Earth’s Requiem. Finishing that is my next major project. 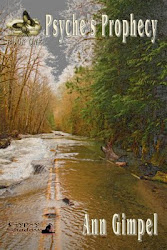 What if your psychotherapist could really see into your soul?  Picture all those secrets lying hidden, perhaps squirming a bit, just out of view.  Would you invite your analyst to take a peek behind that gossamer curtain?  Read your aura?  Scry your future…?

Classically trained at the Jung Institute in Zurich, Doctor Lara McInnis has a special gift that helps her with her patients.  Born with “the sight” she can read auras, while flirting with a somewhat elusive ability to foretell the future.  Lara becomes alarmed when several of her patients—and a student or two—tell her about the same cataclysmic dream.

Reaching out to the Institute for answers, Lara’s paranormal ability sounds a sharp warning and she runs up hard against a dead end.  Her search for assistance leads her to a Sidhe and ancient Celtic rituals blaze their way into her life.  Complicating the picture is a deranged patient who’s been hell bent on destroying Lara ever since she tried to help his abused wife, a boyfriend with a long-buried secret and a society that’s crumbling to dust as shortages of everything from electricity to food escalate.