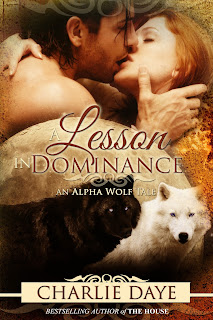 Willow Tempest is an alpha female. She’s stubborn, territorial and refuses to bow to anyone including her brother’s, the alpha’s, mate. When an altercation happens that causes Willow to refuse a direct order given to her by her brother’s mate, her brother Braun has no choice but to punish her in front of the pack but before that can take place Willow runs. Slade Sterling is pack alpha for the Snow Valley pack. When Willow stumbles upon his territory his wolf is immediately taken with her. She’s dominant, beautiful and obviously needs a lesson in dominance, which both he and his wolf, are more than happy to give. When a mating ceremony is arranged between Slade and Willow by Willow’s brother Braun, Willow is furious and fights it at every turn, but when a wolf struts into to town from Slade’s past threatening everything and everyone Willow has begun to hold dear, will Willow be strong enough to claim her right as alpha or will she lose everything, including the wolf she’s just begun to love?

My name is Sidney Rinn. Growing up in an orphanage without parents and not knowing where you come from is hard, especially when you have a gift like mine. I’m a seer. I can see the past in any location I enter. Sometimes I see ghosts but mostly what I see is an instant replay of whatever event played out there. If it was important or traumatic to the person at the time then it’s important to me, otherwise I wouldn’t see it. No, I’m not psychic nor do I claim to be. I’m just your average girl with an above average talent. Unfortunately, that talent had me seeing a murder I was never meant to see, which in turn, led me two of the sexiest men on the planet – Det. Denton Archer and PI Mitchell Caldwell. When Denton asked for my help on the case, I jumped in with both feet not realizing that that decision would change everything. Now, I’m in love with both men and the killer is after me. Can my life get anymore complicated?

They had a routine... Every weekend they hit their usual hotspot, Club Sapphire. They ordered the same drinks anda hung out with the same people. Wanting something different, Courtney convinces Ariana to try a new club down in the warehouse district. It was private and by invitation only, for good reason. After sneaking in, they have the best night of their life. If only they could remember what happened last Friday night.

My name is Cecilia. After breaking up with my no good boyfriend, I headed out to the woods seeking refuge in a secluded cabin in the woods for the weekend. What I wasn’t expecting was to be pulled into The Hunt… A sexually charged type of supernatural Olympic games, where Vampire, Fae and Were compete for the ultimate prize… Me.

You may think you know the story of Romeo and Juliet but you’d be wrong. My name is Julietta Capulet and yes, Romeo and I were star crossed lovers but not for the reason you’d think. I am Vampyr. Romeo was a Vampire Hunter. It was a line that was never meant to be crossed but we did.
The night I was supposed to turn him, I was seized by my father and locked away, leaving Romeo to die from the poison he’d drank. I was heartbroken and remained so for the next 500 years.
Then Romeo returned. Or at least the reincarnation of him returned. Now all I have to do is convince him of who he is or rather was before I’m forced to marry someone I don’t love and fate rips us apart again.

My name is Sicily Chase. All I wanted was one last, fun filled girls's weekend in Vegas before summer break was over. I wanted to hang out by the pool, do some shopping, hit the clubs, meet a hot guy - you know let loose. Well, I did all that and then some but little did I know that my one night stand would turn into so much more not to mention introduce me into a supernatural world I never knew existed.

Ten years ago, Tustin had a fling with a beautiful elemental witch named Tonya. What neither was expecting was the child that night would create. Bestowed very special gifts from both her mother’s and father's bloodlines, Ashley has just become the hottest commodity on the magical market. When her life is threatened, Tonya magically sends her to her father, who has no knowledge of her existence, with only the use of a memory as her guide. As the battle rages for Ashley's life, Tustin wages war against the coven of witches that have kidnapped Tonya. And with the help of Tonya's best friend Ava, they conceive a plan that's sure to be full proof except they weren't expecting for Ava to be taken. Bronx has been a Colony enforcer for as long as he can remember. His life was fine until Ava popped in claiming that they were destined soulmates. Bronx isn’t sure he wants anything to do with Ava and her soulmate claim on him but when the witches kidnap her, he jumps head first into a battle to bring her back into his arms. As the war between the two species climaxes, the ending is something neither side ever expected.
Amazon.com/Breeders2

Thalia Tyme is young woman who's fresh out of college and on her way to an interview for her dream job at Hotel Loret. Unfortunately, Thalia showed up to the right place at the wrong time and was thrust into the world of vampires who mistook her for one of their call girls. Fighting the compulsion that was used on her as well as the immediate lust she feels for Vampire Roman Smith, Thalia will come to terms with the fact that even she is more than what she seems.Warning - This book contains hot and steamy sex with an overly sexy vampire who won't take no for answer.

My name is Veronica Grey, and if you think you're having a bad, think again. I came home from work to find my boyfriend cheating on me and was thrown out of my home. I sought refuge with my best friend Jas, who convinced me to join the same escort service she worked for. And with the amount of money they were paying me, I thought things had finally turned around. Then I met Victor, my first client. He was sexy, wealthy and a vampire. The draw to him was undeniable and I found myself swept into a world of blood, sex and ecstasy. Now the question becomes... Can I save what's left of my heart before Victor destroys it completely?
Amazon.com/Escort

Jonathan Bishop spent his immortal life waiting for the one woman to come along who could survive the transition from mortal to immortal. After nine hundred years of choosing the wrong one and watching her wither away and die, Bishop has all but given up on finding his mate until his closest friend urges him to try one last time but this time allow the spell he casts to call forth his intended. Avirea Blackwell is an American on vacation in London. After spending the first two days in her hotel room because of the rainy weather, she decides it?s time to venture out and see the sights. Two hours into her walking tour a thick bank of fog keeps redirecting her until she becomes lost. Her only reprieve from the storm comes in the form of a hotel entrance which she immediately runs into. When Bishop sees Avirea for the first time he?s disgusted. She?s average looking and there is absolutely nothing interesting about her and refuses to accept that she is his mate. With a little convincing from his friend Marsters, he attempts to get to know the woman he shunned on first sight. Before his very eyes he watches as she transforms from a caterpillar into a beautiful Butterfly. But has his acceptance of her come a little too late?

Samantha Stevens is a beautifully curvy plus size woman with a thriving business, a feisty grandmother and a self esteem issue since her husband left her for a stick figure supermodel.
Ithiel is the angel of death. He's spent his entire existence on earth collecting souls to cross over to either Heaven or Hell depending on how they spent their lives. Patricia Stevens is a feisty old woman who knows her days are numbered especially when Ithiel starts hanging around. She worries that Sam won't survive her death and begs Ithiel to watch over her. Reluctantly, Ithiel agrees.When her grandmother passes away, Sam is more than distraught. She's completely devastated and heartbroken. On the verge of despair, she finds herself wrapped in the arms of the most beautiful man she's ever seen but when his secret is revealed and her life is on the line will she have the courage to sacrifice herself for love or will she walk away from the one man in her life who truly loves her?

Raziel was sent to earth to live as a human for misleading the mate of one of his brother’s into having relations with him. Alone and without the help of his angelic powers Raziel must find a way to redeem himself in order to regain his wings and the right to re-enter Heaven. But the key to his redemption is finding love. Alona Kovina is a young entrepreneur who owns her own bakery in a small town in Vermont. She’s well established and well loved in the community and despite her feisty personality and sarcastic sense of humor, has a heart of gold. When she posts a sign in her window looking for help, she never imagined that a fallen angel would come walking through her door. Unable to resist the idea of helping him over come a past he refuses to talk about, she jumps in with both feet to help Raziel find his way. But when Alona finds out what it was that Raziel did, will her heart of gold help her see past his mistakes and love him anyway or will she too turn her back on him like his angelic family did? 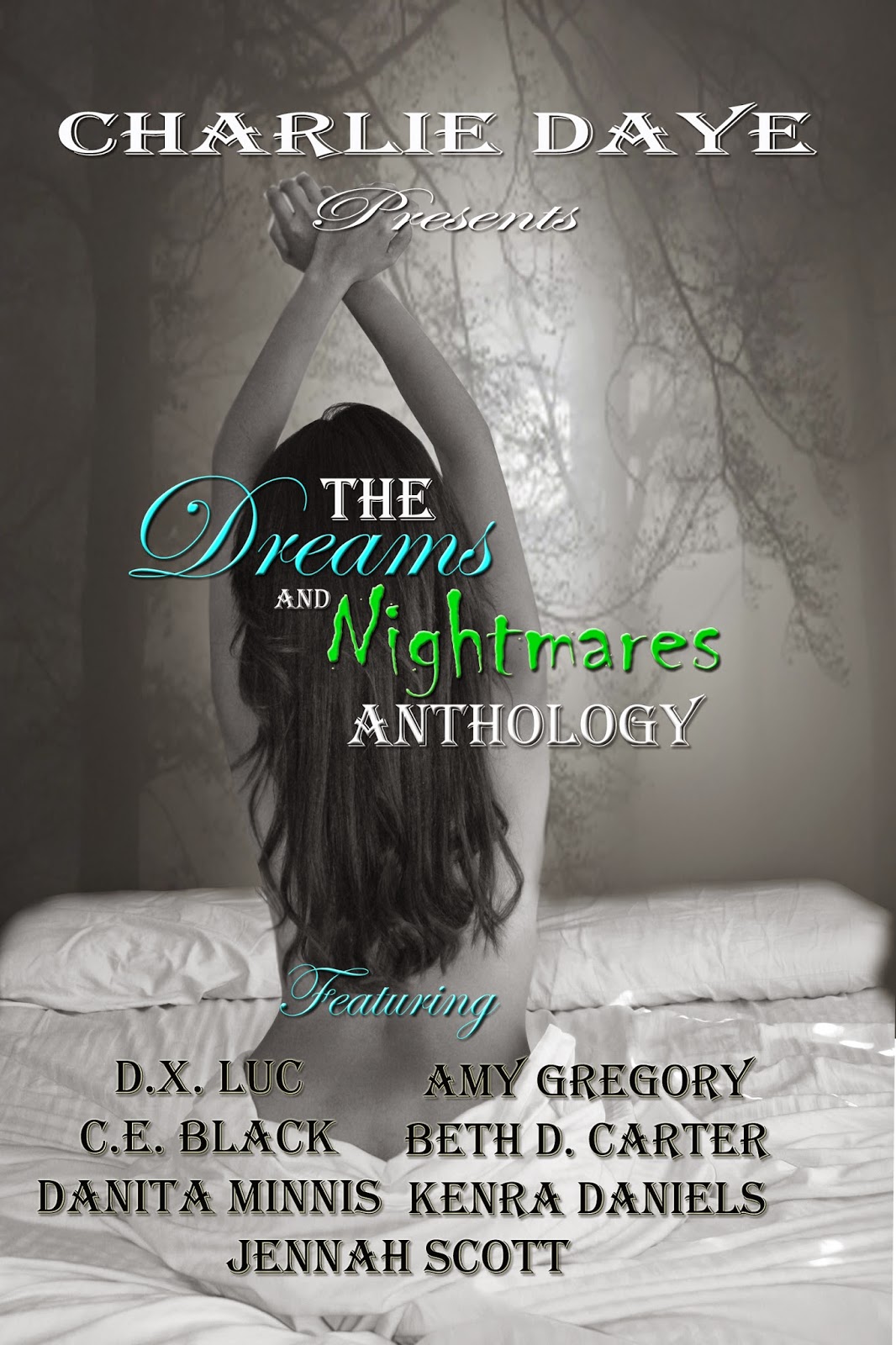 Dreams and Nightmares are like twilight; that misty place between fantasy and reality. When your mind takes you on an adventure you didn’t sign up for and you become someone else, it can be delectable, terrifying or both. Dreaming of that sexy bad boy who seems out of reach? Be careful what you wish for, sometimes dreams really do come true. If you have time, we have the past to seduce you. Whether your fantasy is a lustful mermaid, an irresistable incubus, a vampire predator or an insatiable ghost - hold on tight. You are on the most erotic ride of your life. When your desires blend so thoroughly with the truth that you don’t know the difference, that’s when romance is but a dream. ***This book contains M/M, M/F relations.***

***No longer Available in ebook format***