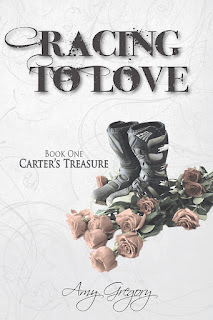 1.       How did you make the decision to become a writer?
I have to admit freely, I didn’t actually make the decision to become a writer.  It chose me.  To be honest it wasn’t very long ago that it happened either.  Based on a sport we eat, live and breathe in our home, it came to me in a dream.  One that wouldn’t let go until I started writing it out long-hand.  For several nights more details came, the visions so clear it was like watching a movie.  After filling several notebooks with hundreds of words, I figured out what I wanted to do with the rest of my life.

2.       Who is your favorite author? Favorite book?
Asking who my favorite author is up there with asking me which one of my kids is my favorite!  J  I LOVE to read.  Now having said that, I’m stuck in two genres and don’t enjoy anything else.  I also really prefer to read books that are built in a series.  I like knowing what else happened after the last page was turned on the first book.  I guess I’d have to say among my top favorites are Nora Roberts, Mari Carr, Susan Mallery, Sylvain Reynard, and E.L. James just to name a few.


3.       Where do you get the inspiration for your stories?
Inspiration.  For me it comes at the most odd times while I’m doing the most ordinary tasks.  My first book was based on a dream.  The next three books that follow in that series just flowed so it was easy to take a mostly formed character and give them their unique issues and history.  The next series is lead off of a character out of my first book that I unintentionally fell for.  I knew I wanted to know more about him so I combined him with the aspects of a small town I used to live in.  I have several stand-alone ideas that I jot down in a small notebook that never leaves my side.  But it can be as simple as a really cool truck stopped at a stop light.  Seeing that exact scene is one of those ideas that will be the spring board for a future book.


4.       Do your characters come first or the does the plot come first?’
For me, my characters have all come to me first.  I have a snippet of an idea.  I start to think about them, their jobs, their past hurts, their fears.  As I start to type the story then unfolds.  I never know what will happen before it is typed.  It’s the characters that push it along, their personalities and needs that tell the story.  I’m just along for the ride.


5.       Have you ever fallen in lust… I mean love with one of your characters?
Oh boy…I wanted this to stay secret.  Have I ever fallen for one of my guys?  As I roll my eyes and turn bright red…YES.  All right, I admit it.  Yes I did.  TWICE!   First is for Eli.  He’s the main character in book three of the Racing to Love series.  There is just something about him.  I love the guys all the same, but you know every once in a while there’s just something special.  I think it’s his quiet soul, or maybe his spit fire determination to make Honor his.  That is really the theme with all of the books, but Eli has more to worry about than just one heart.  That and he has this freaking hot tattoo across his shoulder blades that is …uhhh – so yummy!


6.       When it comes to your sultry sex scenes – where do your ideas come from?
My sex scenes…  Well…I wish you all knew me better.  This question has a thousand answers on the tip of my tongue!  Okay, I’ll be serious again, sorry.  To be honest, it isn’t anything I think about ahead of time.  Just like in real life, to make it feel organic it has to just happen.  I’ve read a thousand books, and no scene is exactly the same.  But you can get a kernel of an idea.  I mean really, there are only so many ways to describe sex.  However, it is that build up, the connection and fire that you want to make the reader feel.  That is unique to each book.  It was something I actually worried about myself as I was writing the second book.  What am I going to make them ‘do’ in the next book.  But when I was writing the third book--Eli’s story, it just flowed and there’s some stuff in there that is…oh…yeah!


7.       Have you ever been turned on by something you’ve written?
And then this leads right into the next question.  Set myself up for that didn’t I? J  Um…as I blush profusely.  I guess the best way to answer if I’ve ever turned myself on by something I’ve written…  If I don’t turn myself on…chances are it won’t turn anyone else on.  Funny how for writing sex scenes multiple times now, I can still get incredibly shy answering ‘real life’ questions about it!  But if you feel something, feel that connection, that spark, the characters’ need for each other, than it is working and that’s a good thing.


8.       If you had the opportunity for a one night stand with one of your characters who would it be and why?
One night stand with one of my own guys…let me think.  Wow, this is hard.  Well, I’ve already discussed my abnormal love affair with a fictional character!  I do love Eli, for sure.  Actually I love all my guys. However, I’m writing about a cop right now and it’s ah…um.   Well, it’s a cop—need I say more?


9.       Tell us about your current novel.
From the outside, Molly West had everything, beauty, brains, and a career she’d retired from not once, but twice.  Being in the limelight and in a sport that was male driven, she was often surrounded by men.  She ignored first the boys, and as she got older, the men.  Her cold shoulder and patented not a chance in hell look were usually enough to get her point across.  Molly had no plans in changing what was a perfectly good system. That is until she walked into the pits.
Carter Sterling had traveled the racing circuit since he was a boy.  He’d heard all the old standbys, She’s out there somewhere, love comes along when you least expect it.  Good things come to those that… Yeah, he’d heard them all.  The last place he expected to meet the love of his life was on a pro track.  All she did was smile, and he knew, looking into her sapphire blue eyes, Molly West was his.  Forever.
If it was only that easy.  From the moment he laid eyes on her, he had a gripping feeling in him.  An overwhelming need to protect her—a girl he’d just met.  Carter had learned a long time ago that gut feelings are almost never wrong.  Molly now held his heart in her hands, but it was going to take a lot more than just love to protect her from the past she thought she’d buried a long time ago.


10.   Is it a stand alone story or part of a series? If it’s a series what can we expect in the next chapter?
I've actually got several projects going at the same time.  I’m writing the fourth and final book, Alex’s Destiny, in the Racing to Love series.  I wish I could say more about it, but there are some twists that I am so excited for the readers to have for themselves!  In the meantime, I’m also writing the first in the series about a small town, my hot and handsome cop is the first character to have his story told.  What’s not to love about a muscled man with a badge whose eyes land on a girl from out of town.

11.   What can we expect from you in the future? Any new books in the works?
As far as the future holds, I have so many ideas crowding the space in my head!  I have several stand-alone ideas, but truly love a series project.  I also have another story that is partially written, but, well, that one will have to release under a pen name!