Monster Erotica is something that has recently swept the market. It's edgy, enticing and pushes the boundaries of what most would never dare dream of... or they have and just haven't admitted it yet. With that being said, let's give a warm welcome to New Monster Erotica Author Clair Renz!!

Hello Ms. Renz and welcome to my world!


So, tell us about your new book.
My book takes the seven deadly sins, in this case Wrath, a demon in Hell’s Seven and a victim who is drenched in the sin. He is tortured in a sexual manner while watching all the wrongs he has committed through his life. Wrath is there to try and show him the right path but the question is, will that ever happen? 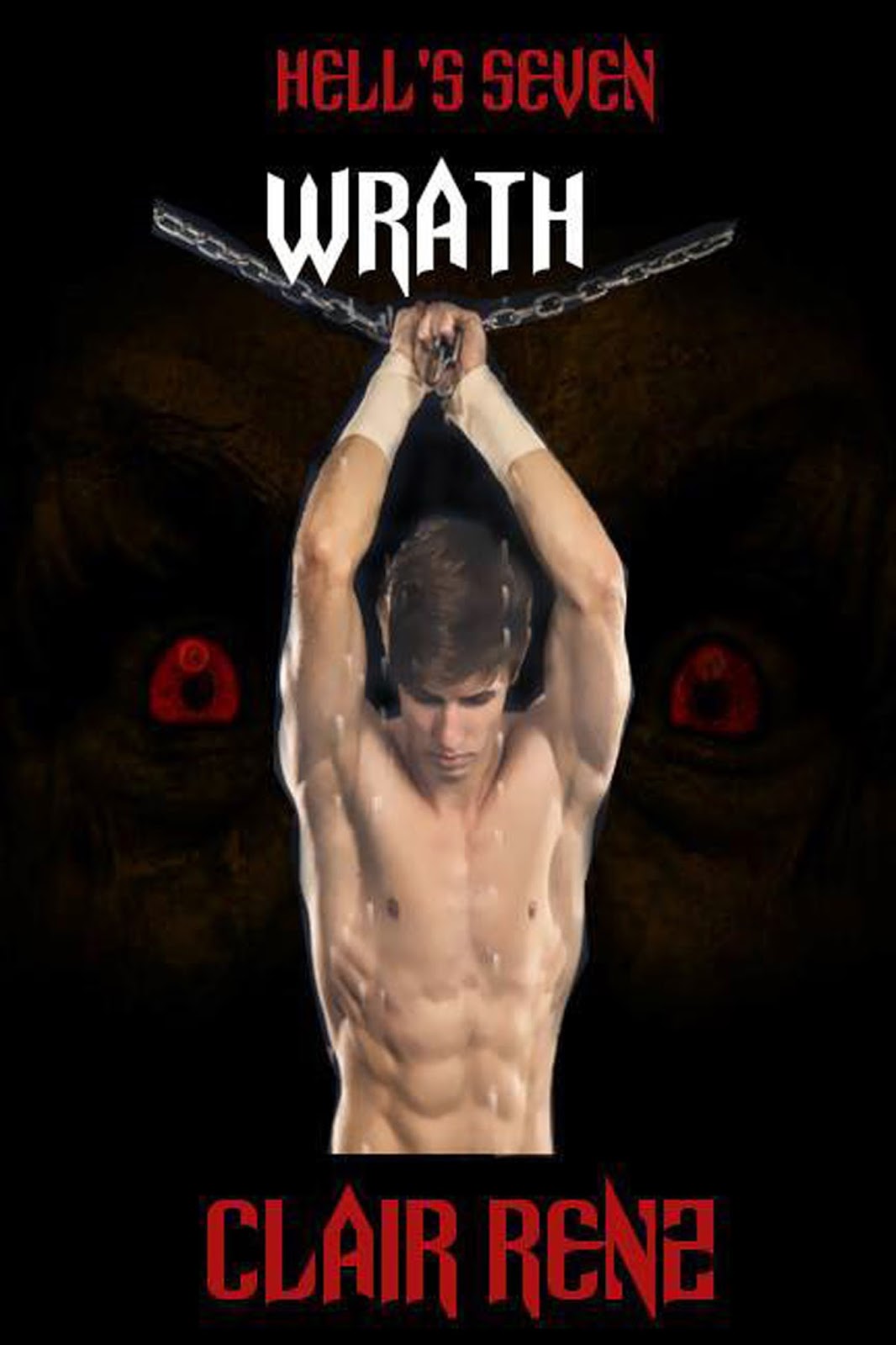 How many books should we expect in this series?
Between 6-7. The second book will combine both Greed and Gluttony.
How did you come up with the idea for a series based on the 7 deadly sins?
I actually had the idea a year ago but was not really happy with how it was turning out so I scraped it for later. Luckily, reading many amazing monster eroticas lead me to break out the series again.
As you know, I have had the opportunity to read the book and I really did like it. But what I'd like to know is what made you decide to write m/m?
I’ve always been curious about the m/m genre. At first I didn’t think I’d be able to do it but once I started, I found it to be so much fun. I can’t wait to continue down this path.
Are there any side characters that have been introduced in this series that might get their own stories?
The only one that could possibly is seen at the end of Hell’s Seven: Wrath. But I won’t tell you who it is. You’ll have to read it to find out. It’s a surprise twist.
OOH OOH! I loved that surprised twist and I really hope said character gets his story! *hint hint* Monster erotica seems to be the new and upcoming thing. What is it about monster erotica that inspires you to write about it?
For me, it allows me more freedoms that can’t necessarily be done with other genres. Monsters are also taboo to most and the idea of one being with a human may actually make them uncomfortable while at the same time pique their interest. If you really think about it, the first real “monster romance” was Beauty and the Beast. We both know there was some heavy petting going on before he became a prince. *wink wink*
*Laughs* So true and it is my favorite Disney movie! So, how did you come up with the character of Wrath?
Don’t tell him, but I have a love for Krampus the Christmas demon. Not saying Wrath is based purely off of him, he’s pretty close. He’s a combination of Krampus, a patchwork doll, and the Lord of Darkness from Legend.
Wow. What would you do if you ever met Wrath in person?
Hope I’m not on his list. He takes his job very seriously and he’s good at it.
Well Ms. Renz, I actually have a surprise for you! I was fortunate enough to catch Wrath in between torture sessions and he's agreed to stop by for a visit. (Loud bang sounds in the background). Oh! That must be him now! (Wrath joins the interview and sits down right next to Clair. As in so close she's pretty much stuck between him and the arm of the love seat. An she looks a little nervous.)
Welcome Wrath!! So... how do you like being the demon of wrath?
First off, she’s right. I do my job well. As for being Wrath, it’s a good gig. I wasn’t always in this position in Hell’s Seven. I was one of the many tortured souls in the pits of Hell once. So the promotion is far better than where I was.
Do you like your boss?
He’s an interesting guy. Quiet and keeps to himself. I wish I could get him into my bed at least once though. He’s stunning. Mmmmmm.
I agree. He is pretty yummy! Who has been your favorite sinner of all time to punish?
I would have said Alex, but I was actually hoping he’d get his freedom. He’s a good kid who was dealt a bad hand. As for his uncle. *laughs maniacally*
Hmm.... I'm thinking that maybe I should start feeling bad for this uncle. Obviously, your job takes up most of your time but when you have free time what do you do with it?


I enjoy listening to Mozart and reading Hemingway. (Charlie looks stunned.) What? Just because I’m a demon doesn’t mean I’m not well bred. Or a gentleman for that matter. At least, I used to be a gentleman. Watch this...
(He places his arm across the back of the loveseat and leans over to whisper in Clair's ear) Wanna come back to my place?
(The color drains from Clair's face) Uh... no?
Hey!!! (Charlie yells as Wrath pics Clair up and tosses her over his shoulder.) You can't do that!!!
(Wrath chuckles) Sure I can. I said I used to be a gentleman. I'm a demon remember? And I only play by the rules when it suits me.
(With his laughter filling the room, he disappears with Clair over his shoulder)
Well, I guess that concludes our interview today. Man, I hope she's okay. Maybe I should put in a call to his boss. (Shakes head) Nevermind...
Buy Links:
Smashwords
Amazon

Posted by Charlie Daye at 1:00 PM No comments:

We've gone from 777 likes to almost 900. As a result, I'm hosting a giveaway! 2 lucky winners will each receive and amazon gift card. Good Luck!

a Rafflecopter giveaway
Posted by Charlie Daye at 10:04 AM No comments:


I thought I'd share with you a little bit of what's happening in my crazy world this year. I have several finished projects and several that I'm currently working on. Some may surprise you... others may excite you.

As you all have seen, I've started a new Sci-Fi series called Children of Kria. To date, I have five books completed in this series...

The second book in my angel series will be available mid-summer. This is the story of what happened to Raziel after he was cast out of Heaven.

The third book in the Hunter's Series is complete and is due out later this year...

I've also started a spin off series that will be released after Faerie's Rescue. This series is about Mermaids. Most of the characters in this new series you've met in The Mermaid's Sanctuary.

I started a new series of Alpha Tales for which the first book has been completed and the next two are currently in the works...

Most you will be ecstatic to discover that I did in fact start the next Breeders book. Unfortunately, I don't have a release date for you on this one yet since it is still a work in progress...

A new series about a girl named Sidney Rinn will hopefully debut later this year. It's centers around a woman who has the power to the see the past and how she uses that gift to solve crimes. Sidney's quirky and sarcastic and I absolutely love her!

I hope that's enough to wet the appetite and keep you looking forward to everything I have coming your way!


Posted by Charlie Daye at 9:54 AM No comments:

A tease from Children of Kria: Fury.

With every word Kria spoke I felt tiny fissures forming in my heart. I grabbed at my chest rubbing the spot over my heart trying to alleviate the phantom pain. “Why do I hurt?” I asked on a whisper.
“As a child of Kria you’re heart will always hurt when someone shares a pain similar to yours. It’s how you’ll find your prey and avenge their victims,” Phoenix replied.
“Wear my mark Neela and claim your vengeance,” Kria stated.
“I will gladly wear your mark Mother Kria,” I replied.
“Where would you like it child?”
“My shoulder,” I replied. “It will be my badge of honor.”
“Very well,” Kria said.
I felt a slight burn followed by a tingling sensation. I looked down at my shoulder and took notice of Kria’s mark. It was a tattered heart that had been run through with a sword, its blood dripping slowly into a glass. It was actually quite fitting considering that’s how it had felt when Gyan broke my heart.
“The time has come, my child, for you to seek your vengeance. Choose a new name or keep the one you have. Whatever you select will be forged into your sword and will be yours from this day forward.”
I swung my sword around in a figure eight formation. Adrenaline surged through my veins as my eyesight turned red in rage. Standing with my feet shoulder width apart and my sword pointed straight away, I yelled my answer in a warriors cry, “I am Fury!”


My sword burst to life in an array of golden flames and before my very eyes my name appeared beneath the flames on the sword and marked me forever as a child of Kria.
Posted by Charlie Daye at 8:34 PM No comments:

Cover Reveal for my Next Release!! 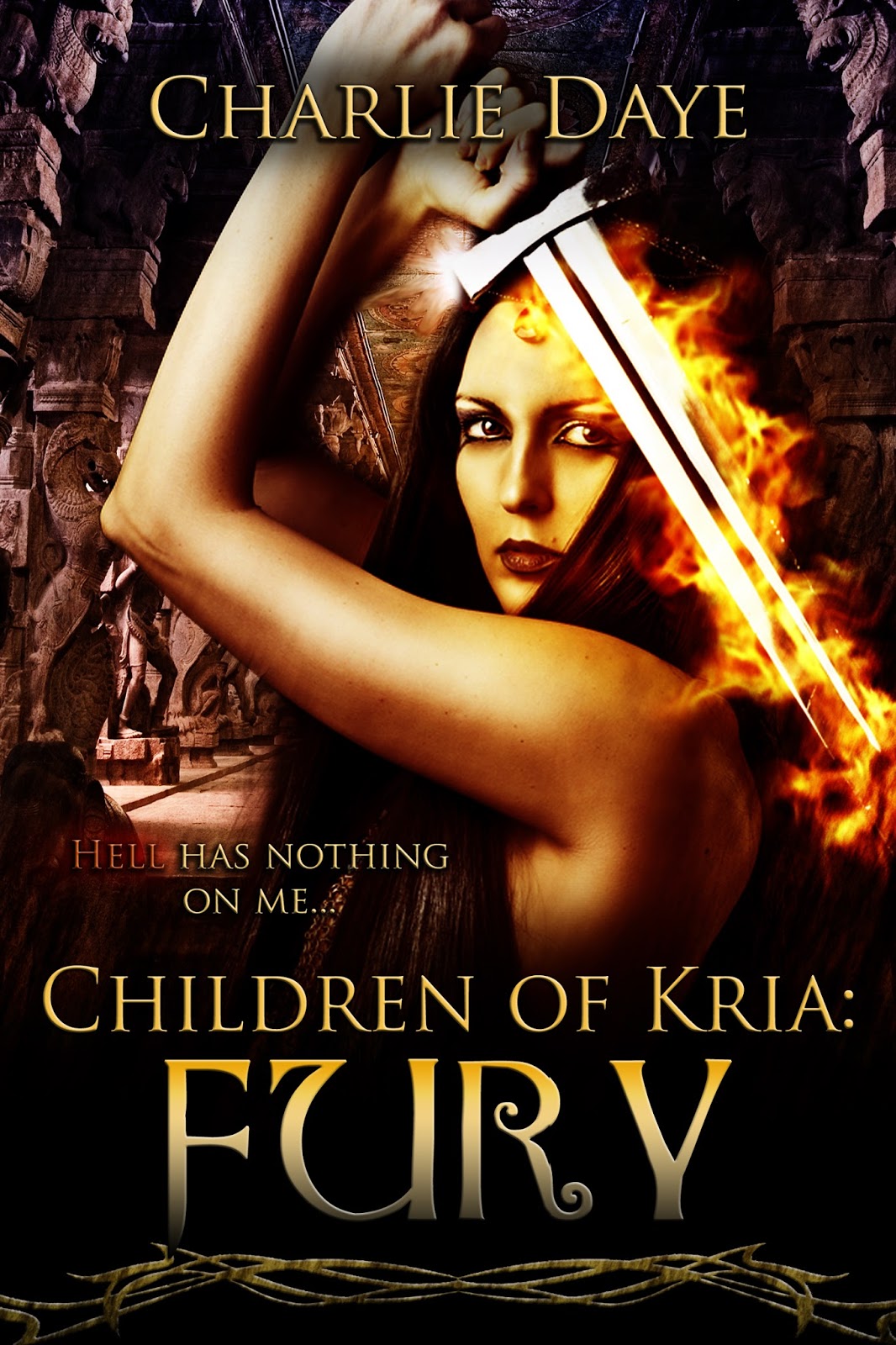 Posted by Charlie Daye at 10:59 AM No comments: