1.     How did you make the decision to become a writer?: When I graduated from high school, I was inevitably forced to confront the prospect of having a career. For a while, I thought only about success hence why I decided on a business degree. I failed at that miserably. School has always been exceptionally hard for me. I didn't realize until after I failed at the business degree that I should be more concerned about what I love to do rather than success. What I have always loved to do was write, and create stories. I have always wanted to become an author but really drove me was my Uncle Steven Pressfield. He wrote the Legend of Bagger Vance, and the War of Art. It was that last book that inspired me to finally write the book series I had always dreamed of writing. I haven't stopped writing since.


2.     Who is your favorite author? Favorite book?:  Needless to say, my favorite author will always be my Uncle Steven Pressfield. He inspires me in so many ways both with his books and his advice. My favorite book will be always be War of Art. My second favorite book is Matilda by Roald Dahl. The story of a young girl achieving success in the face of adversity.
3.     Where do you get the inspiration for your stories? I get inspiration from everything and everyone. My friends, family, and the experiences of my life all play a major role in my stories. My friends inspire me with their dreams, hopes, love lives, and more. My family has always pushed me to achieve the best I can so I definitely get inspiration from them. My experiences as a bully victim, an Aspergers Syndrome kid, and world traveler help to shape my characters and what my plots.
4.     Do your characters come first or the does the plot come first?: I come up with both at the same time and sort of add on to it later. I look at the process a lot like cooking. I add ingredients like depth, character traits, plots twists, and so on. After I am done, everything becomes a delicious dish.
5.     Have you ever fallen in lust… I mean love with one of your characters?: I look at my stories as if they were my babies, my children so to speak. The way I look after them, and try to improve them and believe in their worth is like one would encourage a child. Yes, I love my characters especially my novels but not like a lover. It is more like a parent loves a child.
6.     When it comes to your sultry sex scenes – where do your ideas come from?: I have always said that people don't depict sex as real as they should. They also neglect to mention things like condoms, the pill, and so on. I never do. I describe the foreplay, and the actual sex as best as I can. However, I never fail to mention taking precautions.
7.     Have you ever been turned on by something you’ve written?: Sometimes the guys I describe I become so enthralled with that I start fantasizing about them. I must confess that sometimes I imagine having sex with Dax, and Roy at the same time. They are both so wonderful.
8.     If you had the opportunity for a one night stand with one of your characters who would it be and why?: I think it would be with all five of Aradia's love interests at the same time: Dax, Roy, Tristan, Lamont, and Jayce.
9.     Tell us about your current novel: My current novel is the beginning of my Tales of Aradia the Last Witch series. It introduces the main characters and how the dynamics of the story works. Most of all, it describes the main character Aradia the last witch alive!
10.  Is it a stand alone story or part of a series? If it’s a series what can we expect in the next chapter?: It's the first of what will be a ten volume series. You can expect to see the true direction of what path Aradia takes for the next novels. In the second novel, she discovers a mission that she must complete or at least achieve. Among the hiddens there is still segregation and Aradia who grew up in the human world is not used to that. She learns that as the last of her kind she hold a lot of political power and decides to use it to promote tolerance among the hiddens.
11.  What can we expect from you in the future? Any new books in the works?: Right now, I am focusing on finishing my Tales of Aradia book series. I hope to make it into a franchise similar to Harry Potter. Afterwards, I plan to write a book series about guardian angel aliens. 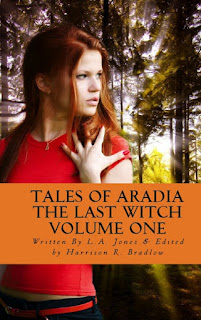 "Unknown to the humans who hanged innocent people at the Salem Witch Trials, real witches of the hidden race were slaughtered on the belief that they had betrayed the hiddens to the humans. Not one witch survived the genocide, or so it was believed for more than three hundred years. Until one day a girl named Aradia moves to Salem, Massachusetts, and all that changes."