I think my characters made that decision. J I had daydreams of my hero Falcon in life-threatening situations. After about three weeks of him almost getting run over by a car, stabbed with an ugly serrated blade and thrown into a fiery pit, I succumbed. Falcon wanted his story told!
2.       Who is your favorite author? Favorite book?
Do I have to pick just one? It’s a tie between Anne Rice and Jude Deveraux. J I love any of Anne Rice’s vampire Lestat books and her Mayfair witches. I also can’t do without Remembrance by Jude Deveraux and her recent Edilean series.
3.       Where do you get the inspiration for your stories?
Suspenseful, haunting movies really affect me. I’m drawn to romance and horror, a common theme in my stories.  Fascinating topics like reincarnation have been a big influence in my happily-ever-afters.
4.       Do your characters come first or the does the plot come first?
My characters definitely came first! I saw Falcon clear as day in my mind while people were trying to kill him. One day I went to the hair salon and there he was staring up at me from a Dolce & Gabbana perfume ad.  Male model David Gandy was Falcon before I knew he was David Gandy! Angel is a little quirky like Zooey Deschanel, and similar in looks. She’s sexy but doesn’t really know it at the age of twenty-one.
5.       Have you ever fallen in lust… I mean love with one of your characters?
All the time. I have three on my mind right now, including my heroes of book two and book three of the Cardiff series. They are hot. That’s what I call inspiration!
6.       When it comes to your sultry sex scenes – where do your ideas come from?
Ummm…me. I’m just a naughty girl, what can I say!
7.       Have you ever been turned on by something you’ve written?
All the time! Hotness = Inspiration!
8.       If you had the opportunity for a one night stand with one of your characters who would it be and why?
Falcon…no, Roman from book 2…no, Xavier from book 3. Oh, forget it, who am I kidding? All three of my heroes!
9.       Tell us about your current novel.
Falcon’s Angel is a labor of love. As I mentioned earlier, I knew Falcon, what he looked like and how he was even before I started writing this story of reincarnation. Falcon and Angel  met in eighteenth century France. With the devil-worshipping cult il Dragone after them, it was a murderous time. In present –day Italy, Falcon and Angel meet again. They don’t know who they are, but il Dragone remembers and wants to finish what they started. If Falcon and Angel can remember the gifts of the past they might have a chance to beat il Dragone in this lifetime.
10.   Is it a stand alone story or part of a series? If it’s a series what can we expect in the next chapter?
Falcon’s Angel is part of a series but each story stands alone. Each novel has its own conflicts to be worked out. The characters all have their own special dilemmas to conquer.
11.   What can we expect from you in the future? Any new books in the works?
The Cardiff series continues with book two where we get the story of Angel’s parents and their tangle with il Dragone. They wait somewhat impatiently to explain her unique ancestry in this second novel. In book three, her uncle Xavier is on the verge of becoming immortal for love. He and I are still debating that outcome. At the moment I want him to be able to have children. Xavier doesn’t care about that as he never had a liking for children. To his point, Xavier’s immortality would aid in the battle against il Dragone. In the end, the characters write the story, so we’ll see how it all works out. 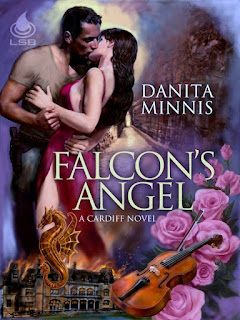