I believe the talent was always within me. I’ve always been an excellent storyteller since I was old enough to read, and even when dancing became my top priority I was always very good at doing demi-character solos – dances that require storytelling through mime. With dance you use your facial expressions and body language to convey the story whereas writing requires the art of using words. Two completely different but equally powerful art forms!

2.       Who is your favorite author? Favorite book?
This is always such a tough question because I have so many I like. In the Fantasy genre I’d say my favourite storyteller is Terry Brooks, and in the Horror/Supernatural genre it has to be Stephen King. Both these men have amazing imaginations, and although their styles are quite different they each bring such inspiring, imaginative, unusual, and, in the case of King, such ‘out there’ ideas to the page. I love that in any story, and I aspire to be as good as them.
My favourite book, if I had to pick only one, is by another of my favourite Fantasy authors, Raymond E. Feist. It’s Magician, and the two that complete the trilogy –  Silverthorn and A Darkness at Sethanon. I believe Magician was instrumental in taking my imagination to new heights and pushing the boundaries of my ideas about story, characters, and style. It also strongly influenced my decision to start writing seriously when my dance career ended.

3.       Where do you get the inspiration for your stories?
Well, my current project is a four-part Epic Fantasy series that had its birth in my love for Star Wars. I first saw Star Wars when I was eight years old, when my love for reading and storytelling was already firmly established in my heart. This movie opened up my mind and stirred my imagination to begin making up my own stories. I was amazed by the imaginations of others to create such brilliance like Star Wars and other Sci-Fi/Fantasy films I saw at that time, and I wanted to be able to do it, too! In short, my natural creative ability started recreating Star Wars into my own characters and my own worlds and galaxies! It was thrilling, and that’s where my Sword Bearers series was born.
As for the rest of my stories (most already outlined and waiting for me to turn them into books), they get their inspiration from other books, movies, poems, and, quite often art – especially fantasy art. I usually focus on the feel of a story, movie etc, and then create my own stories, characters, and unique situations and worlds. I make sure I steer away from stereotypes and constantly push the boundaries of my imagination! The birth of a new story is always the most exciting part for me!

4.       Do your characters come first or the does the plot come first?’
Usually the characters, although as they come into existence then usually the story does, too. It kinda ‘folds’ around the characters and they end up creating their world/s. I know it sounds bizarre J but it’s true!!

5.       Have you ever fallen in lust… I mean love with one of your characters?
Oh, absolutely! When, as a woman, you have the opportunity to create the perfect man then you can bet you’ll fall in lust . . . er, in love with him!! Yup, two of my male characters are extremely hot – in looks and in personality. Strong, gentle, kind, powerful, compassionate, sexy warriors . . . ah, yes, sooo in love!! J

6.       When it comes to your sultry sex scenes – where do your ideas come from?
Well, as a Fantasy author I don’t get too sexy in my intimate scenes, but I write them in such a way as to allow the reader to use their imagination. My main character, KC, comes from a place of deep sadness and loss, so when she meets her mate and their relationship slowly blooms into passion, and they finally come together, it is physically very powerful and emotionally charged because he helps her escape her pain and brings her the comfort, love, and passion and compassion she’s so hungry for.
I don’t necessarily get my ideas from anywhere – I simply allow the characters and the story to create the perfect love scenes.

7.       Have you ever been turned on by something you’ve written?
Oh, yeah! Relating to my previous answers, those scenes of ecstasy, and the love of a man who gives all of himself to his ‘heart-love’ (what KC and her mate, Ren, call each other), then I can’t help but be turned on! *blushing*

8.       If you had the opportunity for a one night stand with one of your characters who would it be and why?
Later in the series, in Book 3: The Sword Bearer’s Awakening, the reader meets First General Devad Tanesin in earnest (a character who was only mentioned in passing in the second book), a man who has suffered great loss in wartime and in his personal life. Because of his job, he can be hard and demanding and appears harsh, but as it turns out he has a heart filled with love and kindness and he’s desperate for love and to share his love with someone. He is secretly in love with KC (sorry, can’t give too much away J ). He’s a skilled soldier with great authority, and he’s very, very sexy in every way – an erotica novel’s perfect poster boy! *giggles* Now, who wouldn’t want to be with the strong, silent, intense (in a good way) type? Aren’t they the ones with the most passion to give??? He’s definitely my choice for a one night stand!

9.       Tell us about your current novel.
Book 2: The Sword Bearer’s Journey, came out in January 2012, and continues the story from KC’s home-world, Theras, into the far reaches of space where she faces new challenges and dangers and sees other worlds and meets alien races she only ever dreamed about. She is still pursued by the arch demon, Drakoor s’et, because as the mighty Sword Bearer she possesses the most powerful weapon in existence – the Sword of Heaven – a weapon that can destroy entire worlds. The demon, filled with a great rage and a burning lust for vengeance, wants the Sword to destroy the Universe and all mortal-kind who he hates above all else.
KC has to learn to accept who she is and accept the burden that was forced on her in the beginning of Book 1: The Sword Bearers, when her mother, the Cai’rin (queen) is killed by the demon. It’s a tough life, and she learns to cope with it in her unique way. She is a natural warrior, but struggles to accept her birthright.
In her journey she experiences great love and great loss, passion, excitement, joy, and unexpected adventures! And all the while she works with her family to stay hidden from the arch demon and prepare for the Final Battle, the battle that will either see the demon destroyed or KC – and if she fails then the Universe will be dust!

10.   Is it a stand alone story or part of a series? If it’s a series what can we expect in the next chapter?
As you know by now this is a series. In Book 3: The Sword Bearer’s Awakening, KC struggles to accept what has happened to her, and through her grief has to learn to rebuild her self-esteem and go on with life. This includes continuing her training with the Sword to face the demon.
The galactic war escalates, and Drakoor s’et is systematically destroying N’varda, the galaxy where the main story takes place. He continues to relentlessly search for the Sword Bearer, frustrated that he still has not managed to lure her into his many traps and obtain the Sword of Heaven.
The tension builds as N’varda and KC prepare for the Final Battle. But will she be ready, or will her mindless thirst for revenge destroy all her hard work and that of her family and allies? Only love can save her – but will it be enough?

11.   What can we expect from you in the future? Any new books in the works?
Book 3 is coming out before Christmas this year, and I’m really excited about that! Book 4: The Sword Bearer’s Ascension, is busy being written and will be available about mid 2013.
I also have a Sci-Fi short story ready for publication called The Door. Although I’m publishing my Epic Fantasy series through a publication house, The Door will go straight to Kindle, Nook, Smashwords, etc quite soon. I’ll let everyone know as soon as it’s available! 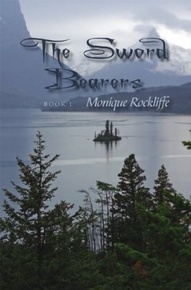 ‘The Sword Bearers’: Synopsis for Book 1

Khyri never wanted to rule as queen or carry within her the renowned Sword of Heaven.

But after centuries of peace, war has come to her planet, Theras, and with it comes death and destruction. Against her will, and in a desperate attempt to save all she holds dear, the Sword is forced upon her by those she loved and trusted.

Betrayed and lonely, Khyri and her family flee across Theras, and, hunting her in her dreams and in the waking world, Drakoor s’et, an arch demon, seeks the Sword – and with it, her soul. 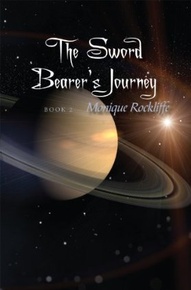 The arch demon, Drakoor s’et, is furious: the Sword Bearer has escaped him again!

KC and her family flee to Verai, to her uncle, Korin Beloruuis, the leader of the Alliance of Territories, the only opposition to Drakoor’s massive forces.

Khyl desperately fights another battle – one of his brother’s twisted mind – while serving beside him in disguise.

With all of N’varda at stake, KC uses her considerable skills and talents to fight a war she hopes she can win, but the fury of the demon is a nightmare she faces every time she closes her eyes to sleep. He approaches!