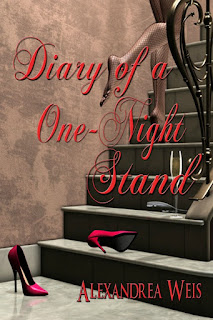 Blurb: Resilient and practical, Kara Barton has continually strived to live a respectable life. She went to college, embarked on a promising career as an attorney, married a great guy, and always appeared to be the perfect wife and mother. But all is not what it seems, and the troubling past Kara has been running from her entire life is about to catch up with her. Urged on by her insecurities about growing older, and desperately wanting to feel one more night of passion, Kara agrees to share a tryst in a hotel room with a sexy business associate, Scott Ellsworth. But Scott wants more than one night together, and Kara quickly discovers it is impossible to resist him. Soon Kara finds herself transformed into the kind of woman she vowed never to become, and the secure world she has struggled all her life to build begins to fall apart. Kara Barton is about to find out how a one-night stand can change everything.

Diary of a One Night Stand www.amazon.com
Posted by Charlie Daye at 10:31 AM